Oakland's art community came together with local Black artists and Endeavors Oakland to paint a massive yellow Black Lives Matter mural stretching the height of two traffic lanes and the length of three blocks down 15th street in Downtown Oakland. As a follow-up to our East Bay neighbors, over 100 volunteers banded together to create a replica going down San Francisco's Fulton street. Much like the BLM movement itself, the giant yellow lettering sprawled down several street blocks, and across multiple major cities, is impossible to ignore. 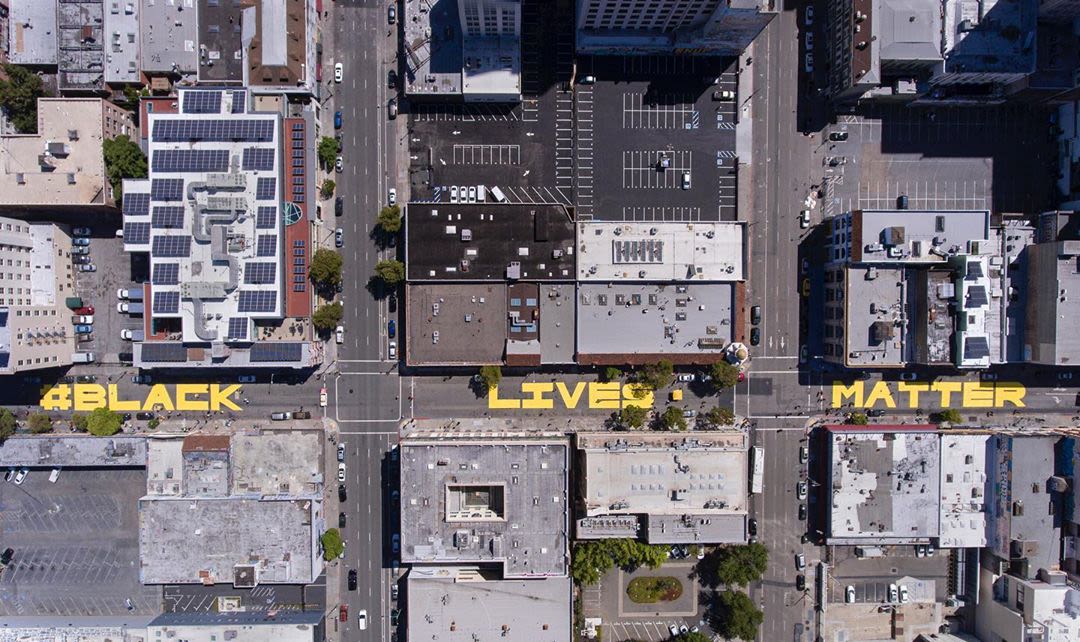 Following suit of many major US cities, San Francisco is the most recently painted, now with its own 'Black Lives Matter' mural stretching down Fulton street in The Fillmore. According to Hoodline, the project was led by the directors of the African American Art & Cultural Complex, Melonie and Melorra Green, as well as Tyra Fennell, of urban art nonprofit Imprint City.

'Many hands make light works' rings true here as SF's 3-block mural was fulfilled by the work of over 100 volunteers recruited by Project Level, a youth arts and education nonprofit based in the Fillmore. When speaking to Hoodline about the day-long project, one of the artists, Andre Jones, said the majority of the community has expressed their support for the mural.

The 15th street mural was a community-led initiative in which several Oakland artists teamed up to paint the massive lettering between Harrison Street and Broadway. Oakland Mayor Libby Schaaf fully supported enacting the mural and commended the creators in an Instagram post saying, "TY to Oakland's incredible art community for making this happen. #GoodMotherGallery".

Make a donation to help Endeavors Oakland support the Black Lives Matter street mural. All proceeds will go to the local black artists involved in making this project possible.

The famous mural made its first appearance just north of the White House on Friday, June 5th. As reported by CNN, the mural was commissioned by Mayor Muriel Bowser, along with the enactment of "Black Lives Matter Plaza", a new name for the muraled section of D.C.'s 16th Street. San Francisco's Planet Labs reported that the massive slogan can be spotted from space. Since the mural's creation, organizers have also added: "Defund the Police" as a call to action for Bowser.

With the movement gaining so much traction, artists around the nation kept the momentum up by decorating their cities' streets with powerful messages as well. "End Racism Now" popped up in Raleigh, North Carolina, as well as another "Black Lives Matter" mural in Sacramento.


Unlike channels we’re able to turn off, the murals represent a physical symbol of the movement that citizens, policymakers, and the nation’s leaders are forced to look at, regardless of their desire to. Although significant reform may seem far from now, the first step is acknowledgment and education, so we’re hopeful this is a step in the right direction.